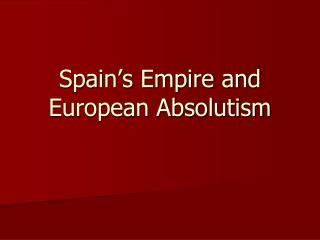 The Age of Absolutism: Parliament triumphs in England. - James i ruled after queen elizabeth i was the first stuart

The Age of Imperialism: The Making of a European Global Order - Demidec super quiz powerpoint. the age of imperialism:

Theory of Absolutism - . rulers wanted to be absolute monarchs, kings or queens who held all the power within their