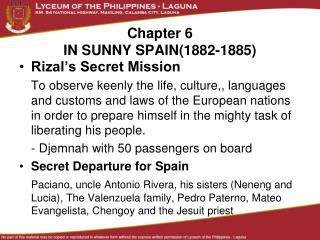 Chapter 6 IN SUNNY SPAIN(1882-1885). Rizal’s Secret Mission To observe keenly the life, culture,, languages and customs and laws of the European nations in order to prepare himself in the mighty task of liberating his people. - Djemnah with 50 passengers on board Secret Departure for Spain

SUNNY ADVENTURES - . the best way to spend your summer. who are we. croatian based company we offer programs in sunny

Willimantic Connecticut 1882 - . in 1882, an aerial map of willimantic connecticut was published by the charles hart

Sunny Patel - How to assemble a clarinet. sunny patel. things you should have. a case for your clarinet extra reeds a

It’s Always Sunny in Philadelphia - . likely the most hilariously offensive show ever!!!. reason f or the topic. it’s