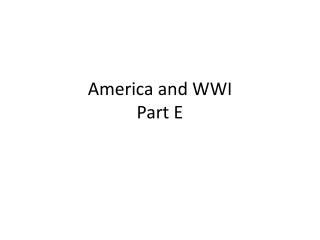 America and WWI Part E. In January 1918, what did President Woodrow Wilson present before Congress? His Fourteen Points , a plan to promote peace after the conclusion of the war 2. What were the basics of the first five points? No secret treaties among nations The Incorporation of America - . the rise of smokestack america, 1865-1900. essential question. industrialization

THE INDUSTRIALIZATION OF AMERICA - . with a stride that astonished statisticians, the conquering hosts of business

CHAPTER 10 AMERICA CLAIMS AN EMPIRE - . section 1. imperialism and america. beginning in 1867 and continuing through the