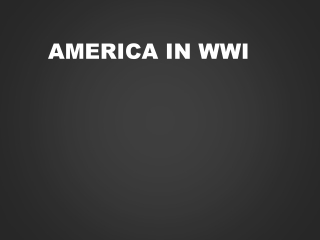 America in WWI. By April 2, 1917, “we are glad … to fight…for the ultimate peace of the world and for the liberation of its peoples…The world must be made safe for democracy…the right is more precious than peace.”. Wilson “kept us out of war” in 1916. America and Latin America - . by: criste chapman. 1823. 1823: the monroe doctrine declares that latin america is within

Latin America - . physical geography of latin america. the andes mountains and the rocky mountains are part of the same

Latin America - . at a glance. latin america. a region that was influenced by spanish/portuguese settlers 1/6 of

Does America Still Exist? - . richard rodriguez. pre-reading questions. what are some traditional symbols and words