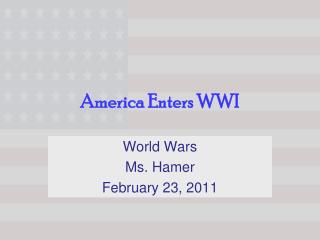 US Enters WWI - . in 1912 ___ was elected to be president. he strong opposed the expansion of us territory and the

The U.S. Enters WWI - . quickwrite. what events caused the u.s. to enter the war? why did the u.s. enter on the side of

America Enters the War - . america is still not officially involved in the war, but they are helping the allies. america

THE UNITED STATES ENTERS WWI (1917) - . objectives. what challenges did the united states face while trying to remain