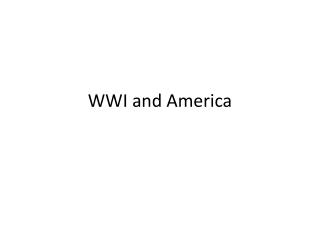 WWI and America. The Draft. 1917: Selective Service Act gave the president the power to draft men into military service The 100,000 volunteers the army had to start with wasn’t enough All men between the ages of 21 and 30 had to register for the draft America After WWI - . economic growth roaring 20’s. isolationism. us reverts back to isolationism after wwi. does not

America and WWI Part D - . wwi u.s. army recruiting poster. when the united states joined the allied side in wwi in april

America and WWI Part C - . when wwi began in august 1914, what did most americans want to do? stay out of the war and be

America and WWI Part E - . in january 1918, what did president woodrow wilson present before congress? his fourteen

WWI and America: Isolationism and Conflict - . the war up to and around 1917. russia dropped out of the war in 1917

America on the World’s Stage: WWI - . a. the road to war. war in europe and problems of neutrality.  alliances

A growing role for America abroad: WWI - . chapter 16. world war i and the us. wwi began in europe 1914 central powers:

Causes of America ’ s entry into WWI - . neutrality. in the beginning the united states wanted to remain neutral. the

Canada and WWI - . canada: pulled into war. had gained independence in domestic issues in 1867- population 8 million