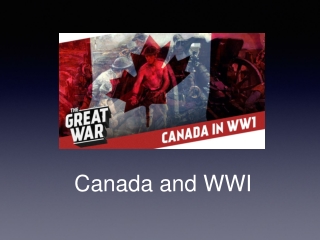 Canada and WWI. Canada: Pulled into War. Had gained Independence in domestic issues in 1867- population 8 million Issues with a confusing foreign-policy structure by 1914 A dominion of the British Empire: British government essentially controlling Canada's foreign-policy

Canada After WWI - . during the war, there were 300,000 employed in munitions factories, and more employed in creating

Conscription in WWI Canada - . conscientious objectors why when national division end of the war. 1914 prime minister

The Impact of WWI on Canada - . security of canada. even though the war was fought in europe, canadians were afraid that

Women’s Rights Movement and Prohibition in Canada After WWI - . scrapbooks. come up with 5 things that catch your

WWI and WWII - . african canadian roles. what was wwi?. it was known as first world war, the great war, and &quot;the

Imperialism and wwi - . spanish american war. fought between the united states and spain in 1898 began because of

Imperialism and WWI - . standard vus. 9 the student will demonstrate knowledge of the emerging role of the united states

WWI and America - . the draft. 1917: selective service act gave the president the power to draft men into military