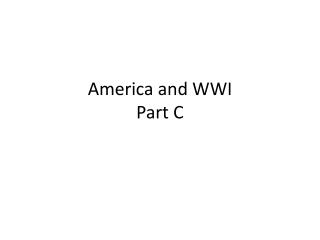 America and WWI Part C. When WWI began in August 1914, what did most Americans want to do? Stay out of the war and be neutral…for the most part 2. But how was American pubic opinion a complicated thing at the beginning of the war? Full of hot air - More than 100 hot air balloons take part in the new jersey festival of ballooning, one of the largest

Session 1020 Multiple Jobs Processing in HRMS 8 - Part I - March 20, 2001 dave dresselhouse peoplesoft agenda this is a

ACCESS TO SUCCESS IN AMERICA: What do the data tell us? - . access to success provosts meeting baltimore, md january 9,

The Militarization of America At What Cost? - . prepared by peace action montgomery www.peaceactionmc.org. topics. the