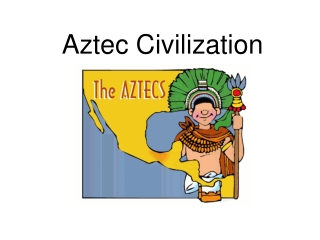 Aztec Civilization. Essential Question. How were both European and Native American cultures changed after European contact with the Aztecs?. SS6H1a: Describe the encounter and consequences of the conflict between the Spanish and the Aztecs and the roles of Cortes and Montezuma. Timeline. FOR THE GOOD OF THE PEOPLE - . aztec social hierarchy aztec education contributing to society. the aztec social

Mesoamerican Map Quest - . take out your page 23 open your textbooks to page 51 using the map in your text, color in the

Inca Civilization - . while the aztec empire grew in mexico, another powerful empire was taking shape in south america.

Aztec/ inca - . by michael taddeo. major events/timeline of aztec empire. 1200 - the aztecs arrive in the valley of

The Aztec - . school aztec schools offered a formal system of education. every child had to attend, including girls and

Aztec Government - . by soha, adeeba, april and patricia . what was the government about?. the aztec government was

The Aztecs - . p erformed: popova ekaterina 10b. aztec civilization had a rich mythology and cultural heritage.

The Ancient Aztec - . by the 5 th graders at claremont. aztec goverment. leaders was emperor or king nobles were rich

AZTEC / SPAIN REVIEW - Both the spanish and the aztec worldviews were based on expansion through conquest .