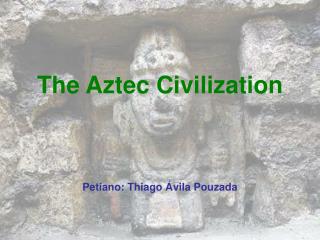 Aztec Civilization - . question 1 - 10. this city was founded by the aztecs on the place where an eagle was perched on a

The Maya, Aztec, and Inca Civilization - The crowd goes wild when you and other players step onto the stone court. only

The Aztec - . standards. 7.7 you will learn about the geographic, political, economic, religious, and social structures

The Aztec - . school aztec schools offered a formal system of education. every child had to attend, including girls and

The Aztec - . the aztec was a great civilization who lived in mesoamerica and developed a culture that included

The Aztec - . the aztec c.1300-1520. emperors ruled a unified empire of city-states through conquest and by forming

The Aztec Empire - . objective. swbat explain how the aztecs controlled their empire. growth. tenochtitlan began as

The Aztec Indians - . by michael and julian. aztec religion. the aztec people worship many different gods such as,