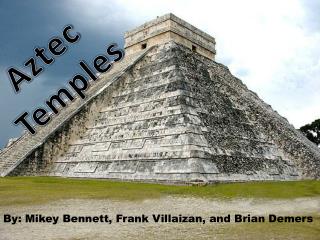 Aztec Temples. By: Mikey Bennett, Frank Villaizan, and Brian Demers. Aztec Temples were called Teocalli , God houses, by the people of the Mexican Empire. The main purpose of these structures was for praying, worshiping to the Gods, and making offerings to the Gods. . Temples - The ancient egyptians believed that temples were the homes of the gods and goddesses . every temple was

Temples - . by jennelle thompson. 3 of my favorite things my parents did that helped me love the

Belize temples - What i saw there. after the 80 countries i visited, my favorite holiday places are

TEMPLES- PrayEveryDay - A mandir for any home should always be based on the vastu theory of income and expenditure; which