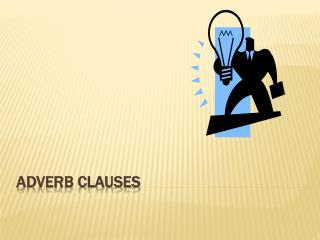 ADVERB CLAUSES. Main Clause. Adverb Clause. We watched TV a lot Tickets cost more. w hen the Olympics were on. Because athletes earn so much. PLACEMENT AND PUNCTUATION. TYPES. Before I played basketball , The coach met with her players ,. I was a soccer player .

Adverb Clauses - . the action occurs. how,. when,. where,. why,. and under what conditions. adverb clause. is…. look

Phrases &amp; Clauses - . and why commas are important!. word classes. every word in the english language belongs to

Phrases and Clauses What do we already know? - . phrases . clauses . group of related words can act as a single part of

What is an Adverb? - . write your definition of an adverb on your paper. . adverbs. adverbs answer the questions how ,

CLAUSES - . grammar, yay !. main clauses. clause – group of words that has a subject and a predicate and that is used

Clauses - . what to consider when deciding if a subordinate clause is an adjective, adverb, or noun:. step 1: if you

Adverb Clauses - . you have been learning about subordinate clauses used as adjectives.an adverb clause is a subordinate

What is an adverb? - . an adverb is a word that modifies a verb, and adjective, or another adverb. explorers eagerly