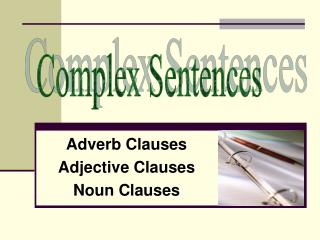 Adjective Agreement in Spanish - . start. in spanish the adjective must match the noun in both gender and number. choose

LINK - . a a a w w u b b i s subordinating conjunctions: although unless after before as because when if

used in place of a noun - Pronoun expresses an action, a condition, or a state of being verb the word that the pronoun

Noun Clauses - . a clause is a group of words that contain a subject and a verb.  clauses can take the place of

Adjective and Adverb Clauses - . identifying writing combining. a complex sentence is made up of an independent clause