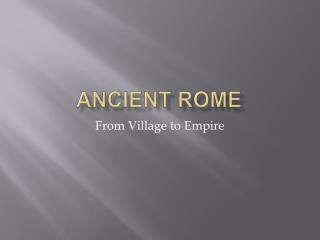 Ancient Rome. From Village to Empire. Romulus and Remus. Legend Abandoned on the Tiber River and raised by a She-Wolf, the twin sons of the god Mars and a Latin princess decide to build a city near this spot. Geography of Rome. Developed because of strategic location Ancient Rome - . geography, government, society and change!. review. what are three accomplishments of the early

Ancient Rome - . the life and times of julius caesar. roman families were small. parents usually had three children or

Ancient Rome - . what do we want to find out? how was the colosseum used and built? what did poor people do in ancient