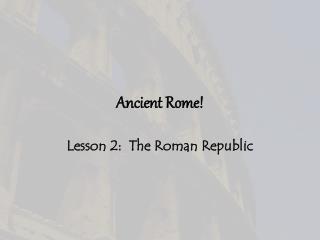 Ancient Rome!. Lesson 2: The Roman Republic. The Spirit of Rome. During the time of the Roman Republic, and throughout the years of the empire, the Roman people were very Loyal : Many brave soldiers fought and died for their country. Ancient Rome : Early Republic to Empire - . rome was established around 600 bce according to legend, the city was founded

Ancient Rome : Early Republic to Empire - . rome was established around 600 bce according to legend, the city was founded

Ancient Civilizations - . social studies sol 2.1 &amp; 3.1. in which ancient civilization would you find the two

Ancient Rome - . world history i, spring 2013. unit essential questions. what was the role of geography is rome’s

Ancient Rome: The Rise of Christianity - . a little history lesson . what is christianity?. entering a time of peace.

Starvation in Ancient Rome - . by: sophie argus. the problem. countless romans were experiencing starvation. many of the