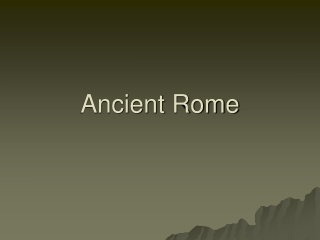 Ancient Rome. Ancient Rome begin as a group of villages along the Tiber River in what is now Italy. Around 750 B.C. these villages united to form the city of Rome. In the Beginning…. Formation of Roman Republic. For more than 200 years, kings ruled Rome.

Ancient Rome - . geography, government, society and change!. review. what are three accomplishments of the early

Ancient Rome - . from village to empire. romulus and remus. legend abandoned on the tiber river and raised by a she-wolf,

Ancient Rome - . the life and times of julius caesar. roman families were small. parents usually had three children or

Ancient Rome - . what do we want to find out? how was the colosseum used and built? what did poor people do in ancient