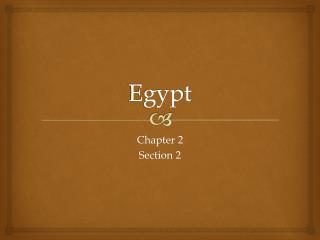 Egypt . Chapter 2 Section 2. Warm up. What do you know about the Ancient Egyptians? Describe where Egypt is located? What is Egypt’s major river? Where do you want to be in 5 years? . The Geography of Egypt . The Nile dominates the Egyptian landscape.

Egypt: The Aswan High Dam - . the environmental impact of the dam.