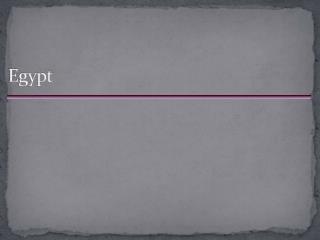 Egypt. Ancient Egypt: Why so stable?. Ancient Egypt lasted for 3500 years due to factors in: Geography Politics Social structure Education Economy Religion = Stability was goal and change slow and cautious. Ozymandias I met a traveler from an antique land

Ancient Egypt - . world history ch. 2. geography and early egypt. the big idea the water and fertile soils of the nile

Egypt - . no more pharaohs, but its still not fair, oh?. by: everett zettersten 7 th period ap us history. where is egypt

The Egypt in Us - . important moving tip…. youtube video. question:. which was the harder task? removing israel from

Facts about Ancient Egypt - . by fiah taejah wiktoria. where is egypt?. egypt is in north east africa. farming in ancient

Egypt Unites - . do now. take out your lesson 4.2 packet and your vocabulary sheet and write at least 1 thing that you

What Do You Know About Egypt? - . by: cindy wishon 2005. what is the name of the continent where egypt is located?. egypt