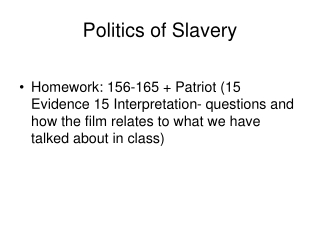 Politics of Slavery. Homework: 156-165 + Patriot (15 Evidence 15 Interpretation- questions and how the film relates to what we have talked about in class). Dred Scott portrait - The union in peril. slavery becomes the dominant issue in u.s. politics, leading to the birth of

Dred Scott portrait - The union in peril. slavery becomes the dominant issue in u.s. politics, leading to the birth of

The Union in Peril - . slavery divides the nation. north and south enter a long and destructive civil war that ends

The Divisive Politics of Slavery - . the wilmot-proviso, compromise of 1850, and popular sovereignty. objectives. to

Slavery - . by : jack sheridan margaret andrews. the norms of slavery. the practice of slavery is accepted in the united

The Debate over Slavery - . chapter 18. the expansion of slavery. the capitol in 1846. the missouri compromise . the

Modern day slavery - . laura chinn 5/1/2014. what slavery exists in our world today?. questions to consider…… in what

COMPROMISE and the Politics of Slavery - . need to know. theory of nullification missouri compromise 36°30' proviso

Slavery In The U.S.A (Before 1864) - . by alex parson and seth brock. slavery first started in the u.s when the first

XXXV. The Spread of Slavery - . a. northern opposition 1. moral objections 2. economic and pragmatic reasons a.