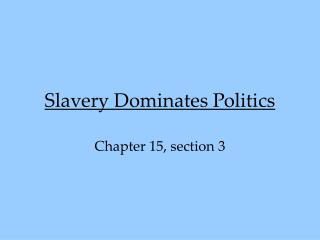 Slavery in the 21 st Century The U.S.A. and the State of Ohio - . you’ve got to be kidding! by roger f. cram hiram

Money in politics - . “money is the mother’s milk of politics” jesse unruh, speaker of the california assembly from

The Civil War - . mr. webster’s class. the debate over slavery. the question of slavery had long fueled debate in the