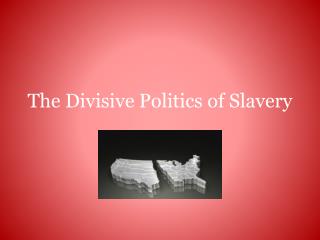 Westward Expansion Causes Conflict Over Slavery - . i. the basic problem. a. not the morality of slavery b. not slavery

Section 3 - Slavery Dominates Politics Find Out: Why the Republican Party was formed The effects of the Dred Scott

The Divisive Politics of Slavery - . section 10-1 pp. 304-309. differences between north and south. the industrialized

The Civil War - . two nations. the case against slavery slavery violated basic foundation of us prejudice –

The Divisive Politics of Slavery - . the wilmot-proviso, compromise of 1850, and popular sovereignty. objectives. to

The Union in Peril Chapter 4 - The divisive politics of slavery. section 1. section 2. the civil war begins. the north

Slavery in America - . slavery’s evolution. at the beginning of the 18th century, most slaves were born in africa, few

Outline - . introduction: need for labor the problem of sources background on slavery slavery and democracy justifying