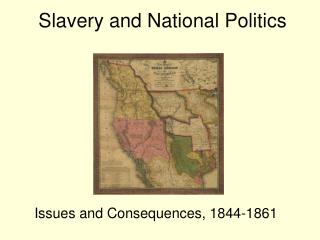 Slavery Dominates Politics - . disagreements over slavery led to the formation of the republican party and heightened

Slavery Dominates Politics - . douglas said popular sovereignty should be used to decide slavery even though ruled

Politics of Slavery - . north. south. by the early 19 th century, northern states had either abolished slavery or put it

Politics of Slavery - . homework: 156-165 + patriot (15 evidence 15 interpretation- questions and how the film relates

Slavery Dominates Politics - . chapter 15 section 2. slavery and political division. key ? - how did the issue of

Slavery, Politics, and Westward Expansion - . political strife between north and south from 1819 up to the election of

COMPROMISE and the Politics of Slavery - . need to know. theory of nullification missouri compromise 36°30' proviso