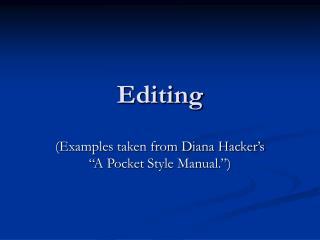 Editing. (Examples taken from Diana Hacker’s “A Pocket Style Manual.”). Global Revisions to Watch For. Focus Organization Content Style Citation. Focus. Is the thesis clear? Does the author drift off topic?. Organization. Are ideas presented in an intuitive order? EDITING - . the work of splicing together shots to assemble the finished film. functions of editing. creating dramatic