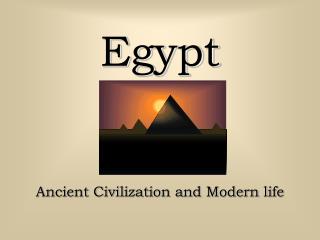 Egypt. Ancient Civilization and Modern life. Historical Overview. Ancient Egypt was the birthplace of one of the World’s greatest civilizations. It was far more advanced than European tribes of the same time period, who were still in the Stone Age.

13th Jan 27 BC Octavian restores power to people and Senate. In return, is granted name - Augustus (“revered one”)

&quot;To speak the name of the dead is to make him live again&quot; - . ancient egypt civilization lasted over

!!! The tea industry in Kenya !!! - . the global distribution of tea to the u.k, greece and egypt. where kericho tea farm

2013 - . the consumer protection agency of egypt. the sold goods are not refundable nor replaced. this slogan was

4.3 Egypt and Nubia - . trade in ancient egypt. although egypt produced a large surplus they lacked many other resources