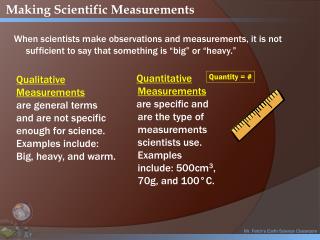 Making Scientific Measurements. When scientists make observations and measurements, it is not sufficient to say that something is “big” or “heavy.”. Quantitative Measurements are specific and are the type of measurements scientists use. Examples include: 500cm 3 , 70g, and 100°C.