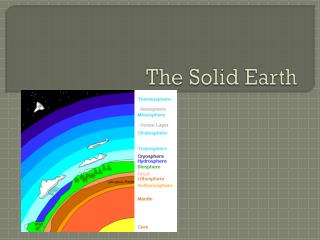 The Solid Earth - . the solid earth!. the earth is: the third planet in our solar system; a terrestrial planet;

TEK 10: Solid Earth - . the student knows that plate tectonics is the global mechanism for major geologic processes and

Structure of the Solid Earth/ Plate Tectonics - . chapter 7. outline for this and the next lecture:. anatomy of

Forces Acting on the Plates (according to C.M.Fowler’s The solid Earth ) - . by: jacob hadley. forces acting on the

The Solid Rock - . words by edward mote music by william b. bradbury words and music public domain. 748. my hope is built

The Solid Rock - . “my hope is built on nothing less than jesus’ blood and righteousness; i dare not trust the