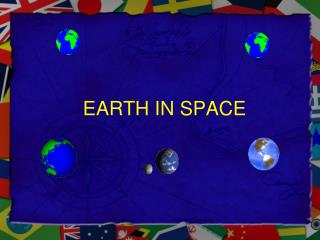 EARTH IN SPACE. The Earth in Space. Main Idea. The earth has life because of the sun. Seasons change because of the way the earth tilts and revolves around the sun. Terms to Know. revolution axis rotation equinox. winter solstice summer solstice. solar system. atmosphere. Earth in Space and Time - . grade 3 mrs. mullins. star. any one of the objects in space that are made of burning gas and

By Abbie Lorimer - Earth &amp; space!. by abbie lorimer. travel to space. people, animals and satellites have all

Earth and Space Science Earth in space and time Objectives and Expectations: - . tek objective 4: the student knows how

Space Geodesy (1/3) - . geodesy provides a foundation for all earth observations space geodesy is the use of precise

Earth’s Motion in Space February 25 , 2011 - . essential question : how does the position of the earth in the solar

The Earth Moves in Space - . aristarchus. the 24-hr movement of the sun, the stars, and the moon can be easily explained

Earth in Space - Key concepts how does earth move in space? what causes the cycle of seasons on earth?. earth in space.

Space Research? - . „space“: the region outside the bound of the earth‘s atmosphere and gravity there are several

EARTH &amp; SPACE SCIENCE Q&amp;A - . by: tyler j. smith. ess1. the earth and earth materials, as we know them