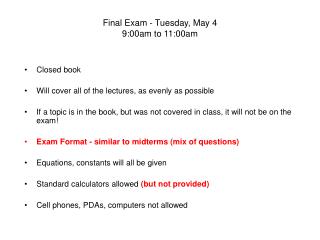 Final Exam - Tuesday, May 4 9:00am to 11:00am. Closed book Will cover all of the lectures, as evenly as possible If a topic is in the book, but was not covered in class, it will not be on the exam! Exam Format - similar to midterms (mix of questions) Equations, constants will all be given World History Final Exam - . study guide. a trading company that made money through financing expeditions from europe to

WHAT DAY IS IT TODAY? - . why is this day important?. the last class. the end of gej1. almost brings tears to my eyes….