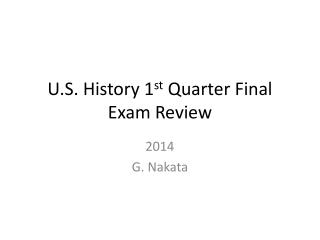 1 st Quarter Review - . you will have 15-20 seconds to answer each question. at that time the next question will appear.

Theatre History Review for Final Exam - . may 16 th and 17 th. today you will rehearse with me on stage each group will

IB Biology Quarter 1 Exam Review - . topic 3.6 – enzymes . guidelines . get into a group of 4 designate a recorder

Final Exam Review World History B - . world war ii axis powers . the major cause of wwii was expansionism in europe and