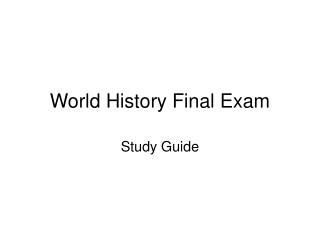 World History Final Exam. Study Guide. A trading company that made money through financing expeditions from Europe to Asia in search of goods to trade. Dutch East India Company. Final Exam Jeopardy! World History II - . jeopardy rules! . you may only consult with your partners. no one else on

Final Exam Review World History B - . world war ii axis powers . the major cause of wwii was expansionism in europe and

HISTORY FINAL EXAM - . how did physical features affect each empire?. 1. where did the scribes of mesopotamia get their

HISTORY FINAL EXAM - . what were the major achievements of each empire?. 12. how was the phoenician alphabet different

Review for World History Spring Semester Final Exam - . directions. use a separate sheet of paper to answer the review

World History Final Project - . requirements. as a group you will create and present a powerpoint. each individual will