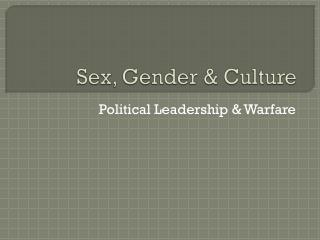 Sex, Gender & Culture. Political Leadership & Warfare. Political Arena. In almost every known society, men rather than women are political leaders In all countries combined, women on average make up only around 10% of the representatives in national governments. Combat & War.

CULTURE MEDIA &amp; CULTURE METHODS - . babitha elias. bacteria have to be grown (cultured) for them to be