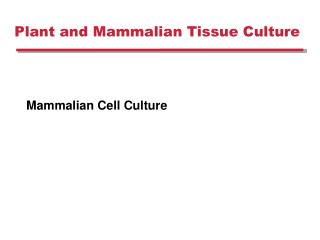 Detection of Mycoplasma contamination in mammalian cell culture - . discovered in 1898 and classified as virus. commonly

UNIT 4: PLANT TISSUE - . meristematic tissue. a flowering plant has the ability to grow its entire life because it

PLANT TISSUES - . tissue :. a tissue is an ensemble of similar cells from the same origin that together carry out a

Culture of Mammalian Cells The Basic Considerations - Outline of the lecture . what is tissue culture?equipmentsaseptic

Mammalian Cell Culture - . what is cell culture, exactly?. cells, previously growing in a human or animal modified to