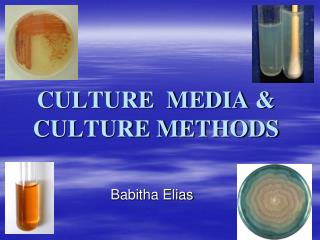 CULTURE MEDIA & CULTURE METHODS. Babitha Elias. Bacteria have to be grown (cultured) for them to be identified. By appropriate procedures they have to be grown separately (isolated) on culture media and obtained as pure for study. History

bacterial Culture methods BASICS - . dr.t.v.rao md. bacterial nutrition and the design of culture media. based on

How To Prepare, Sterilize, AND Test Culture Media - . preparation of culture media. important precautions: prepare the

How Plant Tissue Culture Media Are Useful? - If you want to purchase any of these types of culture media products, just

CULTURE MEDIA - . bacteria have to be grown (cultured) for them to be identified. by appropriate procedures they have to