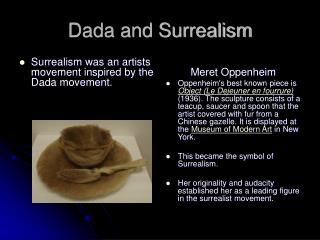 Surrealism was an artists movement inspired by the Dada movement. Meret Oppenheim

Dada and Surrealism - . dada. “the good thing is that you cannot and probably should not understand dada” -richard

Dada and Surrealism - Surrealism was an artists movement inspired by the dada movement. meret

S4 Dada and Surrealism - . dada. anarchic anti-art movement that developed in zurich during world war 1. artists such as

Dada and Surrealism 1916 - . founded in neutral zurich in 1916 group of refugees from wwi overthrow authority and

DADA, SURREALISM &amp; CONSTRUCTIVISM - . artists play hooky from art class: some get radical, some discover their

Dada - . “the idea is more important than the work itself.”. mauricio rojas. what is it?. european art movement-