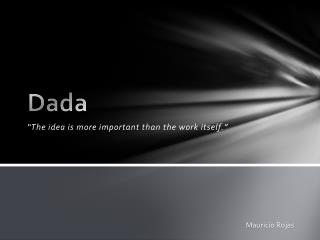 Dada. “The idea is more important than the work itself.”. Mauricio Rojas. What is it?. European art movement- early 20th century. Zurich , Switzerland in 1916. Negative reaction to the horrors of World War I . Rejected reason and logic Dada - . this presentation is based on the museum guide prepared for the dada exhibit at the national gallery of art,

Dada - . we, who are  non -artists, will create  non -art - since art (and everything else in the world) has no

SEGUN DADA - Presentation of the book from idea to venture success. segun dada. about the book. my reason for doing