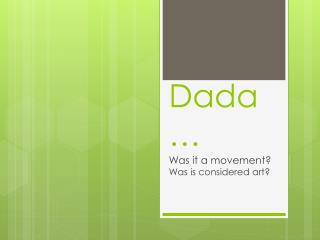 Dada…. Was it a movement? Was is considered art?. Dada. Dada was, officially, not a movement, its artists not artists and its art not art. That sounds easy enough, doesn't it? Of course, there is a bit more to the story of Dadaism than this simplistic explanation.