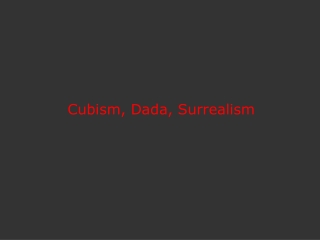 Cubism - . by: abdulrahman al-mana 7a. cubism started in the 20 th century, by pablo picasso and georges barque. a cubist

CUBISM - . analytical cubism. the first phase of cubism (1907 to 1912) reduced natural forms to their basic geometric

Cubism 3 - . intentions and interpretations. the cubism of picasso, braque and gris had more than a technical or formal