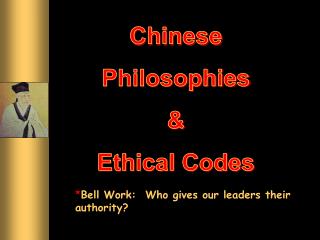 Chinese Philosophies & Ethical Codes. Bell Work: Who gives our leaders their authority?. Mandate of Heaven. It was understood that Chinese rulers got their authority to rule straight from the gods (Heaven) If things went well… the gods felt the emperor was doing a good job!.