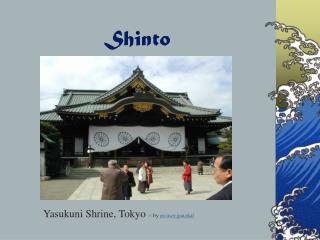 Shinto - . the traditional japanese religion. the name. shinto is interpreted “the way of the gods” the name came

SHINTO - . origins. the name shinto comes from shin tao or “the way of the divine”. date: about 2500 years ago.

Shinto - . the purification experience. brainstorming. what specific faults or sins, in you and in your family, classes,

Shinto - . the traditional religion of japan “ the way of the gods ” the indigenous faith of japan, since ancient

Shinto - . the way of the gods. shinto in history. ancient religion resurged during 15th century. shen do. shin =

Shinto - . demographic information. due to the nature of shinto practice and belief it is hard to get a very accurate

Shinto - . sia, natalie, michelle, calvin, amin and lester. what is shinto?. shinto is a general term of the activities

Shinto - . by calum carpenter and drew frazier. shinto was a religion from japan. it was founded in six-hundred and sixty