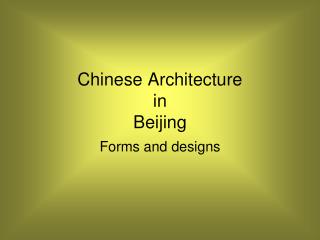 Temple of Heaven in Beijing: A Masterpiece of Chinese Architecture - Ming temple, tian tan or temple of heaven was built

THE ARCHITECTURE OF BEIJING - Ancient and modern. the architecture of beijing. by jordan labonte. feng shui. an ancient

Contemporary Chinese Architecture - . ashfaq . rabee . khaled. glimpses from the past. symmetry use of rhythmic patterns

Studies on obesity in Chinese children in Beijing and Chinese adults in Sweden - . presented to an international

Chinese demonstrators in cities such as Shanghai and Beijing - U. n. secretary kafi annan requests a meeting between

KFC in Beijing - . transnationalism/transnational corporations. the flow of ideas, products, people, capital, and

Turandot in Beijing - . http://v.youku.com/v_show/id_ch00xmte2mzy2mty=.html. fast reading. what is

Institute of Physics Chinese Academy of Sciences Beijing, China - A single molecule study on the mechanism of uvrd