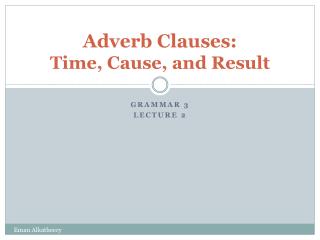 Adverb Clauses: Time, Cause, and Result Adverb Clauses: Time, Cause, and Result

Adverb Notes - . definition. an adverb is a word that modifies a verb, an adjective, or another adverb. adverbs answer

Adverb Notes - . definition. an adverb is a word that modifies a verb, an adjective, or another adverb. adverbs answer

Conditional Clauses - . things to know. in conditional clauses, the verbs can be indicative or subjunctive. ~ si ~

ADVERB CLAUSE - . created by reza ajie saputra. find the adverb clauses in these sentences. you seem very happy when you

Subordinate Clauses - . adverbial clause. a subordinate clause that is used like an adverb to modify a verb, an

What is an Adverb? - . write your definition of an adverb on your paper. . adverbs. adverbs answer the questions how ,

The ADVERB - . by uzma minhaj. what are adverbs?. an adverb is a word which modifies the meaning of a verb, an adjective

Result Clauses - . result clauses. a result clause is another use of the subjunctive mood in a dependent clause. the