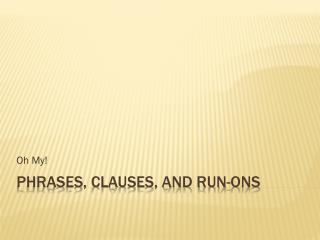 Oh My!. Phrases, Clauses, and Run-ons. A group of two or more grammatically related words that forms a unit . Does NOT have a subject and a verb. Does NOT express a complete thought. Has the force of a single part of speech, such as a noun or adverb. Phrase. Into the well

Literacy 1 st Phrases - . list b. after we get home. such as this. he became rich. play with ben. lots of things. follow

High Frequency Word Phrases - . practice reading these phrases smoothly and fluently. he had to. she said that. to the.

Sayings and Phrases - . for the 5 th grade. the big idea. sayings and phrases are important to study because they are

Subcontracting and Flow Down Clauses: Understanding What the FAR Does - and Does Not - Require - . breakout session #605

Phrases with Second 100 Popper Words - . over the river. my new place. another great sound. take a little. give it back.

Noun Clauses - . a noun clause is a group of words with a subject and a verb. who whom when which how where