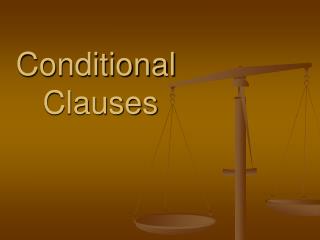 Conditional Clauses. Things to Know. In conditional clauses, the verbs can be indicative or subjunctive. ~ si ~ introduces these clauses. “If this, then that” a.k.a. the condition and result. 2 parts of the conditional sentence. PROTASIS APODOSIS

Conditionals and Arguments - . concepts. conditional antecedent and consequent necessary and sufficient conditions: how

Conditional learning: Switching associations - . are there any types of learning that associative theory cannot explain?.

First Conditional - . the first conditional is a structure used for talking about possibilities in the present or in the