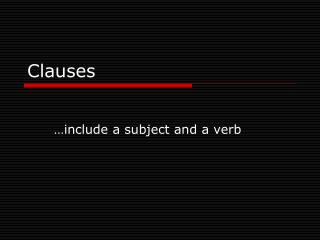 Caesar Comprehension and Text Evidence - . for each questions below, complete answer a in english, based on your reading.

Unit Two - . e-mails. unit goals: what you should learn to do: chatting online using abbreviations and slang in

The syntactic abilities of children with SLI: From Tense to Movement - . 37-975-01 challenges to language acquisition:

课标人教实验版高二 Module 7 Unit 4 - . language study. read the sentences with attributive clauses in them and

The syntactic abilities of children with SLI: From Tense to Movement - . 37-975-01 challenges to language acquisition:

The Who-Whom Problem in Noun Clauses - . lesson 20 joseph c. blumenthal. few people notice the sign. the noun sign is the

How can I know how to punctuate? - . 1. clauses. clauses and punctuation. commas are necessary for comprehension. in

Phrases &amp; Clauses - . and why it matters…. phrases and clauses . how are they alike? they are both a group of