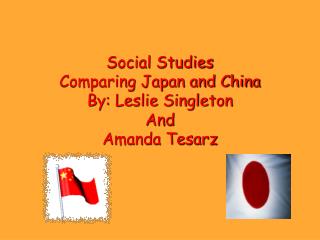 China vs. Japan - . china. china is the home of one of the oldest civilizations largest population in the world third

China &amp; Japan - . background. china had been resisting outside influence from the west- didnâ€™t want the

Imperialism: Japan/China - Deannex techboy add/edit slides as you please, just make sure they're in order. imperialism:

Transformations – China and Japan - . ch 28. aks. 44b - compare and contrast the rise of the nation state in germany

China and Japan Today - . president hu jintao’s visit. china is committed to structural change of the economy from

China and Japan - . isolation and exploration. the ming dynasty 1368-1644. the rise of the ming. the first ming emperor

China and Japan Modernize - . china and the west. during the 1800s, china declined as western powers used diplomacy and