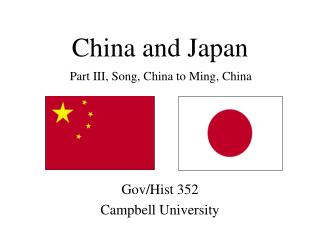 China and Japan. Part III, Song, China to Ming, China. Gov/Hist 352 Campbell University. Song Dynasty. The Song Dynasty lasted from 960 to 1279. It controlled both the North and South from 960 to 1127. The capital at that time was Kaifeng.

Empires in 1500: Ottoman, Mughal, China &amp; Japan - . bell ringer: read the article about the start of the ottoman

Imperialism over China and Japan - . agenda. 1. what is gained by the united states after the spanish-american war in

The Attitudes of China and Japan to Reform and Change During the Period 1861 to 1894 - By farisah arafeen. the attitudes

Transformations – China and Japan - . ch 28. aks. 44b - compare and contrast the rise of the nation state in germany