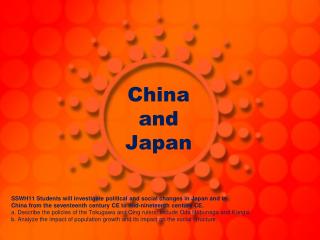 China and Japan. SSWH11 Students will investigate political and social changes in Japan and in China from the seventeenth century CE to mid-nineteenth century CE. a. Describe the policies of the Tokugawa and Qing rulers; include Oda Nobunaga and Kangxi.