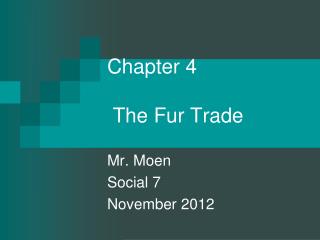 Champlain, New France, and the Fur Trade - . samuel de champlain and his huron indian allies fighting the iroquois near

Chapter4 Resources and Trade:The Heckscher-Ohlin Model - . introduction a model of a two-factor economy effects of Chapter 2: The Expansion of Trade - . what new products have been introduced into our society as a result of global

Chapter 4—Competition for Trade - . social studies 7. converging in the