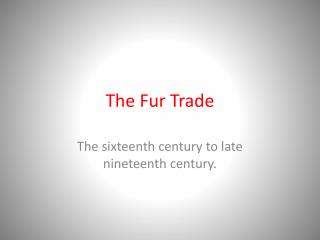 The Fur Trade. The sixteenth century to late nineteenth century. Pre Contact. Before European contact the Indigenous peoples of the Americas people survived by using resources off of the land.

National Board of Trade Lena Johansson Director-General 2013-10-14 - . national board of trade. agency for foreign trade

Trade and Environment at the WTO - . table of concents. brief history of the trade and environment debate trade and

TOPIC 7 International Trade - . definitions:. trade or trading:. refers to the transactions or the exchanges of ownership