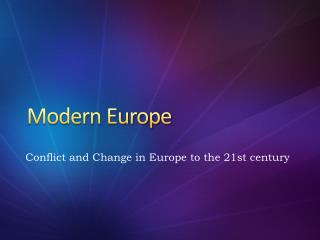 Modern Europe. Conflict and Change in Europe to the 21st century. The Cold War. Rise of Superpowers. United States vs. Soviet Union Emerged as 2 “superpowers” – had the military and political strength to influence worldwide events. Distrust started between the USA and USSR

Renaissance - . medieval or modern?. key topics. the politics, culture, and art of the italian renaissance the powerful

The Renaissance - . the beginning of modern europe. the renaissance. renaissance,&quot; french for